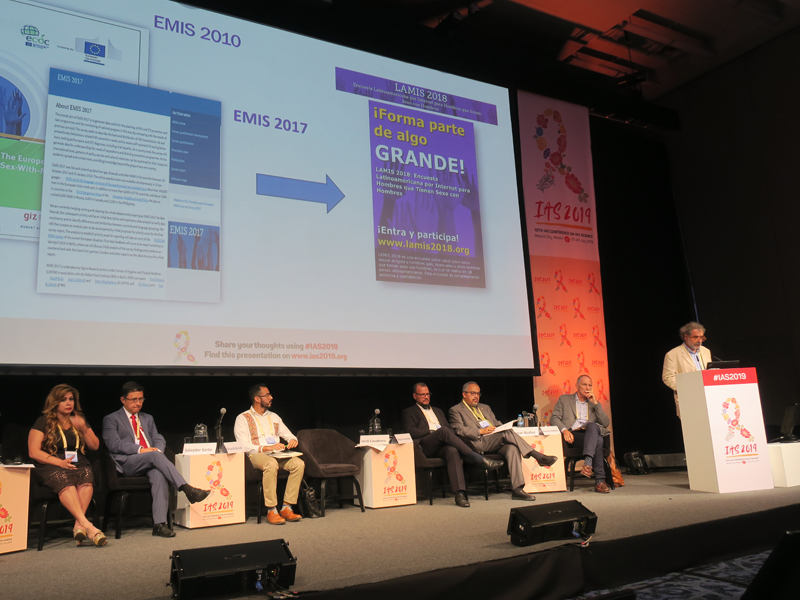 Dr Jordi Casabona has presented the RIGHT-PLUS Network at the New approaches to monitor HIV services and accelerate the response to HIV among men who have sex with men and transgender women in Latin America Symposium, organized by the WHO within the International AIDS Society meeting (IAS 2019) that took place in Mexico City from 21 to 24 July. Dr Casabona is Scientific Director of the CEEISCAT, a research group affiliated with the IGTP.

RIGHT-PLUS is an Ibero-American network of researchers carrying out projects to improve the health of gay men, men who have sex with men (MSM) and trans-sexuals coordinated by the Centre for Epidemiological Studies of Sexually Transmitted Disease and AIDS in Catalonia (CEEISCAT). Its main objective is to promote research on topics of sexual health in these key populations in Latin America and the Iberian Peninsula in order to gather information on HIV and sexually transmitted diseases (STDs) which will facilitate an effective response from health services. The aim is to know and understand the characteristics of these populations, provide public health services connected to their sexual health and increase the capacity of community organizations. The network is made up of the Faculty of Public Health at the Peruvian University Cayetano Heredia in Lima, the Faculty of Medical Sciences of the Casa de São Paulo in Brazil, the Public Health School of the University of Chile, The San Carlos University of Guatemala, the Instituto de Saúde Pública of the University of Porto, Portugal and the CEEISCAT.

RIGHT-PLUS is supported by Coalition Plus, an organization whose mission is to create international knowledge networks in order to tackle the fight against AIDS, STDs and viral hepatitis and which provides logistical support to the network.

RIGHT-PLUS is part of the LAMIS project, which is managed from the IGTP and preliminary results from this project were also presented at the conference. In order to understand the health needs of gay and bisexual men and other MSM in Latin America the project developed an on-line questionnaire, which was completed by 65,000 people in 2018. The data collected will facilitate monitoring and an evaluation of the status of the epidemic in these countries as well as guiding public health policies to deal with it.

Currently, few Latin American countries have much information on the exact health needs of key populations whose situation is made worse by the discrimination they suffered experience. The project is in a phase of detailed analysis of the data country by country and thanks to agreements with the IGTP the Latin American research centres can access their own data.