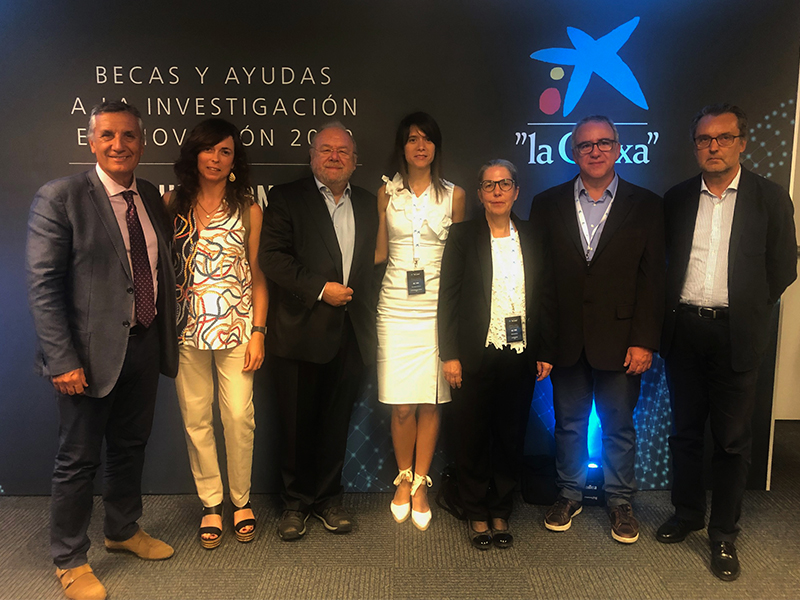 Three research groups at the IGTP have received three of the 21 grants in the 2019 call for CaixaImpulse, awarded by the "la Caixa" Foundation. The projects receiving the awards are led by Dr Katrin Beyer, Dr Francesc Borràs and Dr Alicia Martínez-Piñeiro and focus on improving the diagnostics for with Lewy body dementia; new non-invasive methods for monitoring renal dysfunction and new predictive markers for acute ischemic stroke respectively.

Under the slogan "Questions for the future," the award ceremony on Monday 16 September Isidre Fainé, President of the "la Caixa" Bank Foundation; Jaume Giró, General Director of the Foundation; Javier Solana, member of the Board of Trustees and Pedro Duque, Minister of Science, Innovation and Universities of the Spanish Government presented the awards. The 79 national and international researchers will use the funds to carry out their research in the best universities and research centres in Spain and Portugal to change the future for people.

The project led by Dr Beyer, the research group Genomics and transcriptomics of synucleinopathies centres on validating analysis of blood miRNA as a diagnostic tool for Lewy body dementia. Because of the similar symptoms and development, this type of dementia is often wrongly diagnosed as Alzheimer's disease. The wrong diagnosis can lead to the application of the wrong treatment, often with serious secondary effects, so a reliable diagnostic tool is much needed; this project proposes to develop one from the analysis of miRNA in blood. In the last decade, the number of deaths associated with neurodegenerative diseases, such as Lewy body dementia, have increased considerably so it is urgent to progress with the diagnostics to be able to prescribe the correct treatments to halt progression, or in the future possibly reverse the disease.

Dr Borràs leads an innovation project focussed on monitoring patients who have had a kidney transplant. The Innovation in Vesicles and Cells for Application in Therapy Research Group (IVECAT) will work on validating extracellular vesicles in urine as an alternative method to biopsy, the standard method for diagnosing chronic dysfunction in kidney transplant patients. Biopsies are invasive and uncomfortable and in these cases must be carried out repeatedly with an associated risk of permanent kidney damage. The methods Dr Borràs' group is proposing has shown promising results as a less invasive and cheaper method without the potential associated risks.

The proposal from the clinical research team led by Dr Martínez Piñeiro, based on the predictive markers for functional recovery before the application of treatments for acute ischemic stroke. It is known that somatosensory evoked potentials (SEPs) are potentially valid biomarkers of blood flow in the brain in patients after a stroke. This information could be monitored in potential patients with a pocket device, allowing the medical staff to have much more prior information in order to evaluate patients and take decisions.

This year's CaixaImpulse Programme has presented 21 awards promoted by "la Caixa", with the collaboration of Caixa Capital Risc and EIT Health, aimed at non-profit research centres, universities and hospitals in Europe and which have innovative biomedical projects to develop. Since the programme started 5 years ago, it has helped 99 initiatives to get started, 14 of which have become spin-off companies. In the 2019 edition, the IGTP has obtained financing for 4 projects and in previous editions it has obtained financing for 4 more: Covergel, Teràpia Gènica per al tractament de l'Atàxia de Friedreich, Detecció de micobacteria no tuberculosa i Apotransferrin.