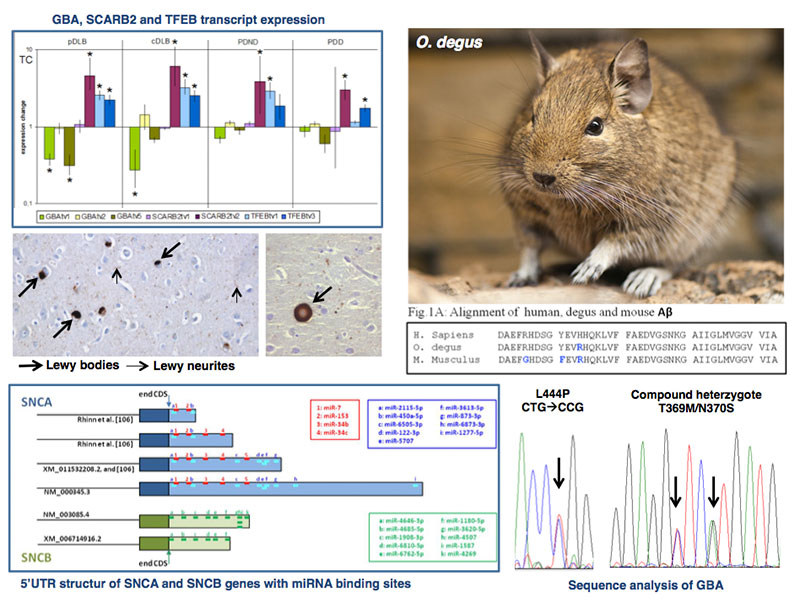 Dr Katrin Beyer studies the molecular neuropathology of synucleinopathies. Her work is integrated with Anatomical Pathology Group in the hospital, led until recently by Dr Aurelio Ariza and now headed by Dr Pedro Fernández Ruiz.

The synucleinopathies are of extreme interest as they include Parkinson's disease (PD) and dementia with Lewy bodies (DLB), which is another form of dementia and one of several diseases characterized by the formation of Lewy bodies in cells, and multiple system atrophy (MSA), a rare neurodegenerative disease with similarities with both Parkinson's and DLB.

In 2015 there were over 46 million people living with dementia in the world with an expected overall rise to 131.5 million by 2050. This represents a huge number of people with decreased quality of life and increased pressure on family members, carers and the health system.

Dr Beyer tells us, "My research has always been motivated by the desire to find an accurate differential diagnosis for dementia with Lewy bodies.   80% of these patients are incorrectly diagnosed with Alzheimer's disease; the tragedy is that 50% of these have adverse reactions to the treatments for Alzheimer's, sometimes so severe that they can lead to premature death.  We urgently need to be able to differentiate between these patients."

Research is an ongoing and demanding activity, and scientists often go long periods without being able to publish results, but sometimes everything comes together.  Beyer's team have published four papers in five months, including two reviews of the current research in the field.

In a paper published in Genes in February, Beyer and Ana Gámez-Valero (also of the IGTP) published a review paper of research to date on the role of an error in gene copying in the two very similar genes SNCA and SNCB in these diseases.  This paper was based mainly on Beyer's extensive research but summarized what is known in the field at the moment.  Research consistently shows that this error is involved in the development of dementia with Lewy bodies and multiple system atrophy.

In another strand of her work, Beyer was co-author on a paper reviewing the use of the gerbil-like Octodon degus (the degu) in research on Alzheimer's disease in Pharmacology & Therapeutics.  One of the many challenges to studying diseases of old age in humans is the lack of a suitable model.  The traditional laboratory mice are short-lived it is not possible to study the biological and external factors experienced during aging that bring on neurodegenerative diseases based on their short lives.  The degu, however is a long-lived animal that lives in groups, and some older individuals develop a disease very similar to Alzheimer's as well as other disease of aging such as: diabetes, blindness or hardened arteries.  The review team looked at many aspects of research already carried out on degus analysing biological and genetic factors, diseases it develops and behavioural and social aspects.  They concluded that it would may provide a very good model for studying neurodegenerative diseases and new projects are being planned to put this into action.

A paper published in Aging and Disease describes a study led by Beyer.  Working with researchers from the departments of Neurology and Pathology at the HUGTP they analysed brain samples from 20 patients with Lewy body dementia.  The team aimed to find out at what point in the biological processes certain substances known to be signs of DLB appeared and if they were detectable in blood samples. They found that chemical signs in specific brain areas of people affected were specific to exactly which type of the disease they had.  They also detected signals in blood samples, although these were very different for PD and DLB patients.  The work adds to the armoury of techniques that could be used to differentiate between these devastating diseases.

The fourth paper has just been published on-line in Parkinson & Related Disorders in May describes how the group sequenced variations in the glucocerebrosidase gene in patients suffering from a sleep abnormality called idiopathic REM sleep behaviour disorder (IRBD).  It is known that sleep disorders are common in people who later develop dementias or Parkinson's, but what is happening exactly is still to be defined.  Beyer and Gamez found that these variations were more frequent in people with IRBD and associated with a later development of dementia with Lewy bodies.  This work shows that IRBD is a good marker for DLB and identifies people with this sleep disorder as an ideal candidate group for studies of preventive treatments.

"We do not have a definitive diagnosis yet," explains Beyer, "but for the first time we have identified a group who could be treated before other symptoms start.  When patients get a neurological diagnosis, sadly the damage has already been done."  When we asked her about her future research Beyer told us, "We are attacking on many fronts and at the moment our results are very encouraging.  All research is very hard, but the thought of direct benefits for the patients keeps us in the fight."