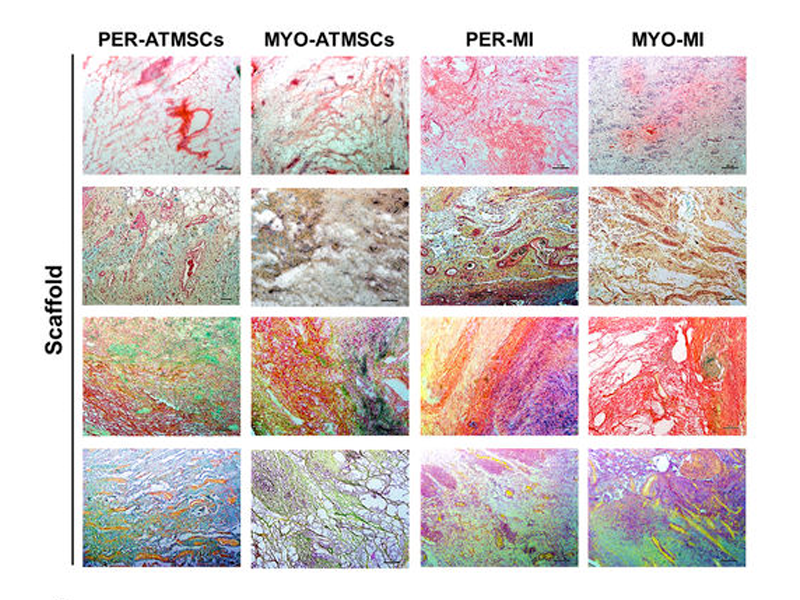 Researchers from the CIBERCV group at the Germans Trias i Pujol Research Institute (IGTP) working with scientists from the Institute of Bioengineering of Catalonia (IBEC) and the company Anaxomics Biotech have developed and compared two scaffolds, made by tissue engineering techniques.   The scaffolds are made from tissue derived from porcine myocardium tissue and decellularized human pericardium enriched with mesenchymal cells from cardiac adipose tissue (cATMSCs).

The results published in Scientific Reports, of the Nature Group, show that both scaffolds are optimal to administer cells in the context of engineering cardiac tissue and both contribute to significantly improving cardiac function after an acute heart attack.  However, the scaffolds repopulated with cells from the pericardium retain their structural integrity better and show a greater capacity for cellular recolonization.

"We have been able to successfully generate two constructs derived from extracellular cardiac scaffolds that have first had the cells removed (pericardium and myocardium) and then been repopulated with cATMSCs while preserving their structural integrity.   What is more, we have shown that they are biocompatible and effective in the case of an acute heart attack in vivo, improving the function of the heart in the animals treated" explains Dr Antoni Bayés-Genís, leader of the research group and Head of the Cardiology Service at the Germans Trias I Pujol Hospital on Campus Can Ruti in Badalona.

For the study, the group analysed the framework and micromechanical properties of the scaffolds before and after the decellularization and repopulation processes.  The scaffolds maintained all the properties in all the conditions studied except the myocardium scaffolds repopulated with cATMSCs, which were twice as rigid as the normal tissue (porcine myocardium) and the same myocardium scaffold once it had been decellularized.  In subsequent proteomic studies the IGTP researchers found that the decellularized scaffolds maintained a high level of proteins from the matrisome and the essential proteins from the cardiac extracellular matrix with a higher content in the decellularized scaffolds of pericardial origin.  Additionally, the pericardial scaffolds showed a better penetration and retention of cells, due to their having larger pores.

Finally, both repopulated scaffolds have been evaluated in a pre-clinical heart attack in porcine myocardium model.  Independently of the biological origin and repopulation, all the scaffolds integrated correctly with the adjacent myocardium in the receptor animal and showed both revasculation and reenervation.  The animals treated with repopulated scaffolds showed a significant recuperation of ventricular function compared with the control animals.

Cardiac insufficiency is the final stage of most cardiovascular diseases, such as myocardial heart attack, and is still one of the most enticing challenges for regenerative medicine due to its high incidence and prevalence.

Because of this, cardiac cellular therapy, based on administering cells with a regenerative capacity, has been the main focus of studies aimed at regenerating the heart.  "But the results of clinical trials show a modest improvement in terms of function of the heart, so the current lines of research are looking at regeneration based on tissue engineering techniques, and more ambitiously, the regeneration of bio-artificial hearts," explains Dr Bayés.