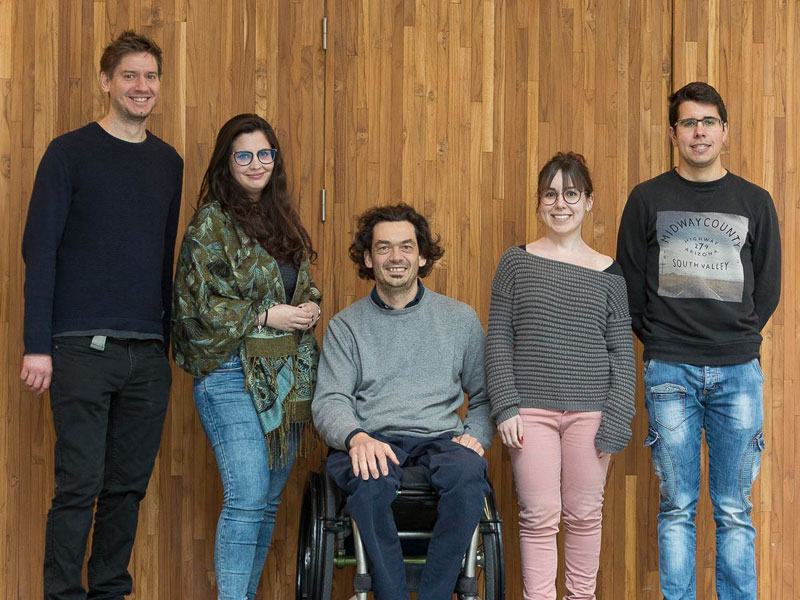 Lorenzo Pasquali is a Ramon y Cajal researcher at the Josep Carreras Leukaemia Research Institute (IJC) and is affiliated with CIBERDEM and the Germans Trias i Pujol Research Institute (IGTP), where he leads the Endocrine Regulatory Genomics group. He has led this study to look for the mechanisms that causes an inflammatory response to trigger pancreatic beta cell death, leading to the onset of T1D. Mireia Ramos-Rodríguez, first author of the paper published in Nature Genetics, is a doctoral student in the Endocrine Regulatory Genomics group. The study was carried out in collaboration with Decío Eizirik of ULB (Brussels, Belgium).

In Type 1 diabetes (T1D) the immune system selectively destroys the beta cells in the islets of Langerhans in the pancreas, depriving the body of a way to make insulin and control blood sugar. In the search for why some people develop T1D, researchers have identified more than 60 regions on the genome where there are genetic variants associated with a higher risk of developing T1D, but their functions are not known. Additionally, most of these variants are located in DNA sequences that don't encode proteins and were once dismissed as "junk DNA".

The immune attack is orchestrated by T and B cells; these cells infiltrate the pancreatic islets and, by releasing cytokines and chemiokines, create a "dialogue" with the insulin-producing beta cells. Some sort of misunderstanding in this "dialogue" is what ultimately causes beta cells to lose their functions and die. In order to test the mechanisms underlying this initial stage of the disease, the group analyzed changes in gene expression, protein production and DNA structural changes in beta cells exposed to inflammatory cytokines.

Only about two percent of the genome contains sequences that make up genes, which can then be translated into vital proteins. Conversely, much vaster parts of the DNA do not code for genes and were previously thought to have no function. Scientists are increasingly discovering that these regions are actually very important and rich of regulatory sequences that act as "switches" and control which genes are to be turned on and off.

The group found that exposure to inflammatory cytokines changes the regulation of genes in the beta cells and affects the functioning of the cells. They have mapped approximately 3,600 regions in the non-coding DNA that are activated in the pancreatic islets. They also observed that exposure to inflammatory cytokines induces changes in the DNA folding allowing these non-coding regions to come into contact with their target genes. As a result, thousands of genes are switched on and translated into proteins.

The team found that genetic variants known to be linked to an increased risk of developing T1D are found in these newly mapped regions of the genome. "DNA variants in such regulatory elements may affect the capacity of the insulin producing cells to react to an inflammatory environment," says Dr. Pasquali, "this knowledge will allow us to understand the detailed mechanisms whereby specific DNA variants predispose to type 1 diabetes." He adds.

The model the group has used is of particular interest as it mimics the conditions islet cells might experience in the early stages of T1D. Much of the T1D genetic risk was shown to affect the immune cells, enforcing their role in the development of the disease. The islet cells themselves have been shown to have genes that control the key steps in responding to danger signals and the innate immune system. However, linking islet gene regulation to T1D risk has yielded no significant results, until now. This new data opens the door to uncovering molecular mechanisms acting in the islet cells of the pancreas.

Now that the group have mapped out the switches that activate genes responding to an inflammatory environment in the pancreatic islets, it will be much easier to test different hypotheses of how common genetic variants are affecting the islet cells in T1D. Future work could look at different ways that the immune system stresses beta cells, in later stages of the disease, for example.

"These results could apply to other diseases", says Mireia Ramos-Rodríguez. "In many cases we do not understand why the immune cells attack a certain cell type. The dissection of regulatory elements in disease-relevant stimuli brings us closer to understanding the molecular mechanisms not only of T1D but also other autoimmune diseases".

Datasets for cytokine-responsive regulatory elements are available for download and visualization at the Islet Regulome Browser (www.isletregulome.com) a publicly accessible web tool to explore genomic data developed and maintained in the Pasquali Lab.