An update on advances in stroke therapy 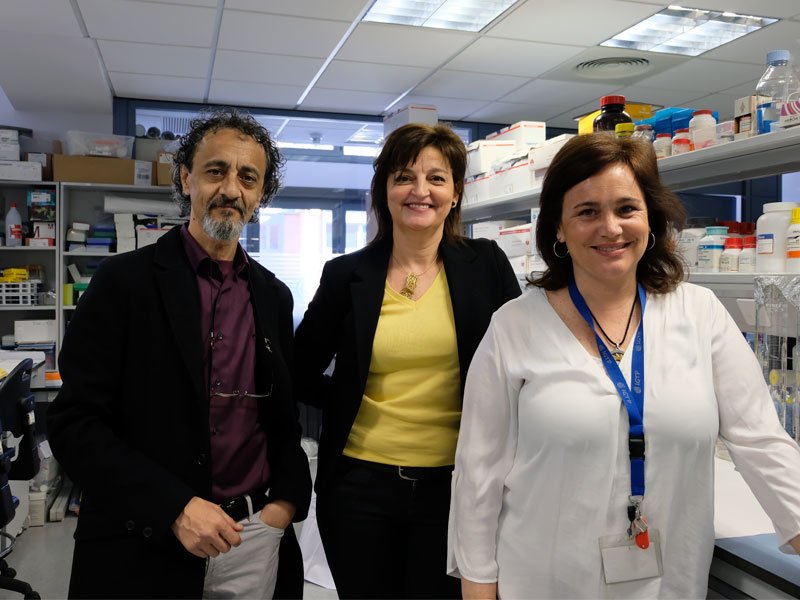 The Cellular and Molecular Neurobiology Research Group, led by Teresa Gasull at the IGTP has a mission to carry out basic and translational research into strokes.  This week they have published a review of recent advances in the field, which includes the role of the ferroptosis in stroke-induced neurodegeneration and includes references to their own recent publications in the field.

The recent review paper published in Frontiers in Neuroscience, focusses on iron metabolism and the part it plays in the death of brain cells after a stroke.  This is just one of the aspects of stroke that the team studies, others include biomarkers to correctly diagnose and treat stroke, medications to reduce the effects of stroke and using bioimaging techniques to further understand what happens to the brain before, during and after a stroke event.  The research includes both acute ischemic stroke (AIS), caused by obstruction of a blood vessel by a blood clot, which accounts for 85% of cases, and Intracerebral haemorrhagic stroke (ICH) caused by the rupture of one of the vessels, which accounts for 15% of strokes.  "We are studying the complex relationship between the two, amongst other things," explains Gasull.

Iron is a complicated element for the body to use, it is essential for many biological functions, such as transporting oxygen round the body, for which it is tightly bound to proteins and the balance between this bound iron and available iron is strictly controlled by an army of molecules interacting in intricate pathways.  An excess of the free form of iron is highly toxic and can cause cell death, but both kinds of stroke can upset the iron balance in different ways and cause exactly this to happen.  The review paper examines iron chemistry in detail in the context of both AIS and ICH, but here we will focus on the work carried out by the group at the IGTP, who have published four papers in just over a year, three making important contributions to this field and the recent review.

The blood-brain barrier and stroke

An important feature of the brain is that it is protected from many substances in blood flowing round the body by the blood-brain barrier (BBB).  The BBB means that the cells lining the blood vessels in the brain form flat sheets that are very close together, joined by so-called tight junctions.  Iron must pass into these cells and is transported across them to be released onto to the brain side.  Ischemic stroke disrupts these pathways, causing an excess of free iron to flood through the cells into the brain, where it reacts quickly and sets off processes toxic to the brain cells.  Haemorrhagic stroke physically disrupts the junctions and red blood cells, free iron and other toxins flow into the brain through the gaps.

Not all brain cells metabolize iron the same way

Another complication in detailing brain iron chemistry is that the players of cellular iron balance are type specific and the list of proteins involved is constantly growing.  The review covers different receptors, proteins and mechanisms that involve the nucleus of the cell, immune pathways and organelles within the cells to handle iron in different cell types in the brain.  "To treat stroke in patients, we need to understand what is going on in all types of cells in the brain," explains Octavi Martí-Sistac, one of the three authors.

Upsets in the balance of iron are associated with rare but severe degenerative conditions and there is evidence that more common overload disorders, such as hemochromatosis are also associated with pathological changes in brain iron chemistry.  Changes in iron levels have been associated with many conditions from mild ones like aging and inflammation to severe diseases such as Huntington, Parkinson and Alzheimer's.

"We study the effects of stroke on the brain, but many of the chemical responses and some of the possible interventions are relevant to brain damage that occurs in other diseases as well," points out Nuria De Gregorio-Rocasolano from the team.  "Some of our work could have implications for the treatment of other diseases, such as cancer or Alzheimer's."

In 2012 a specific form of cell death was recognized; unique and distinct from other types, it involves an accumulation of iron, causing the production of masses of toxic peroxide disrupting polyunsaturated fatty acids in the cells walls and it is associated with reduced glutathione levels.  Ferroptosis causes cell death in many neurodegenerative diseases and plays and important role in both types of stroke.

The Cellular and Molecular Neurobiology Biology Research Group have made three contributions to the field recently.  Work carried out by Veronica Guirao, published in the Journal of Neurochemistry by the group led by Teresa Gasull in 2017 described how administering a metabolite of the statin atorvastatin to nerve cells from the cortex of the brain that had been deprived of oxygen and glucose after a stroke acts as a rescue and protects them from damage.

Previously, iron-overload had been shown to be a marker for increased brain damage and a poorer outcome after an AIS, by Dr Antonio Dávalos of the Germans Trias Hospital in 2012. The IGTP group has also previously shown that in animals iron overload means that an initial ischemic stroke has a higher chance of becoming a haemorrhagic stroke, but the mechanism has not been completely understood.

Glutamate is the most abundant excitatory substance neurotransmitter in vertebrates and is responsible for 90% of communications through nerves.  Both glutamate and iron are essential for neuronal survival but an excess of glutamate or of free iron are both toxic. Several researchers, including the IGTP group have published research showing that iron overload was associated with larger areas of brain damage in animals exposed to experimental ischemic stroke.

In May last year the group published a paper in Redox biology identifying the application of apotransferrin as a possible neuro-protector after stroke, this is an entirely novel therapy.   The ongoing work is being funded by Caixa Impulse of the "la Caixa" Foundation and is subject to patent as a new treatment.

"There is a dire need for treatments for stroke," Gasull tells us. "The funding for innovation and technology transfer is vital here to push this work forward to develop a therapy for patients."

In September 2018 the group contributed to a paper published in Stroke in which they looked at the only treatment for ischemic stroke; the application of tissue-type plasminogen activator to remove clots.  It is not given to all patients as they are at risk of secondary bleeding, the study investigated whether iron-overload played a part in this risk.  Research confirmed that it does and identified a possible mechanism.  "This work has important implications for identifying which patients can be given which type of treatment", says Gasull.  "Stroke is major cause of disability and death and our aim is to help avoid stroke events, provide more personalized treatments for those that occur and improve the quality of life for patients.  To do this, we need to decipher the incredibly complex chemistry of the brain."