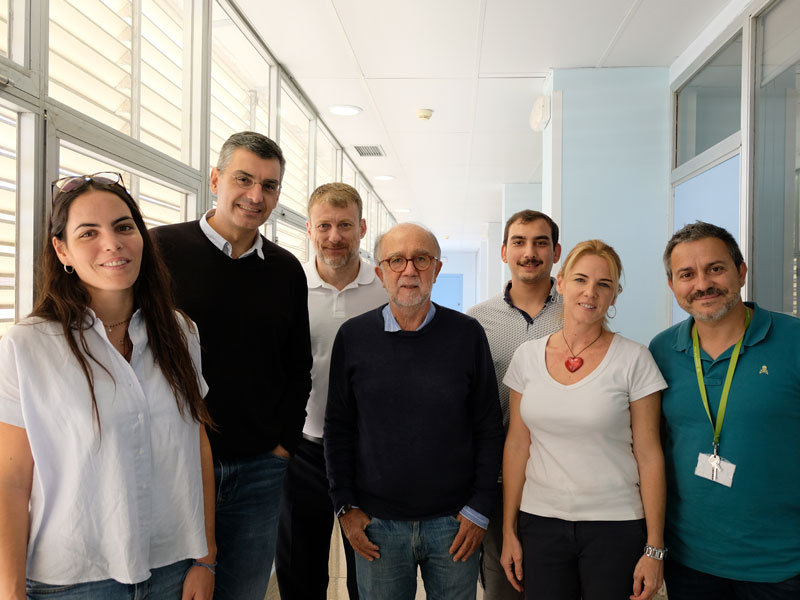 Researchers from the Germans Trias i Pujol Research Institute (IGTP), the Biomedical Research Networking Center on Cardiovascular Diseases (CIBERCV), the University of Barcelona and the the Universitat Politècnica de Catalunya have created a new field probe to detect the presence of metallic stents as well as their potential structural failures through microwave spectrometry (MWS) in a non-invasive and non-ionizing way. Results have been published in the journal Scientific Reports.

Coronary artery disease (CAD) is the main cause of death in developed countries. It is usually caused by atherosclerosis, characterized by the accumulation of cholesterol and other fatty substances in artery walls that can cause coagula to form, these can be responsable for illness such as angina or heart attack. Treatment for CAD comprises lefestyle changes to modify coronary risk factors and several drugs, but when coronary obstructions are important, it is necessary to carry out a revascularization treatment through percutaneous coronary intervention (PCI) or coronary surgery.

PCI is a minimally invasive procedure which involves dilatation of a balloon at the point of obstruction and the placing of a small stent. In some cases, and over time, the coronary stent can fail due a restenosis process; that is, proliferation of cells in the vascular wall that ends up blocking the vessel, or due to a thrombosis process, when a stent obstruction occurs due to the formation of a thrombus. Several phenomena have been related to a higher risk of these failures: a fracture process can take place in the stent's metallic structure; there can be a lack of contact between the artery wall and the stent (incomplete apposition) and in other cases an incomplete expansion of the stent can occur, reducing its diameter.

There is no available technology to detect such phenomena like fracture, incomplete apposition or incomplete expansion of the stent, or even the presence of restenosis in a non-invasive way. "Invasive techniques like coronary angiography, intravascular echography and optical coherence tomography are expensive and cannot be used on all patients with coronary stents", states Carolina Gálvez Montón, first author of the article and member of Germans Trias i Pujol Research Institute and CIBERCV. In addition, these techniques are complex and require specific equipment which is not available in all hospitals.

"The MWS probe consists on a small device that produces electromagnetic waves similar to the ones in a mobile phone and which detects modifications that occur in that wave due to the stent" says Ferran Macià, UB researcher from the Magnetism Group of the Department of Condensed Matter Physics of the UB.

In order to test this new probe, "We carried out the subcutaneous implantation of the stent in a murine model where we detected the presence of devices as well as restenosis-derived changes and fracture through variation of resonance frequency, common in microwave absorption spectra, which reflect the occurrence of changes in the length and the diameter of the stent", says Gálvez-Montón. In particular, the study included five control animals, with a subcutaneous stent implantation simulation, and ten experimental animals in which a metallic stent was introduced into the interscapular region.  Basal measurements were carried out before and after stent implantation on days 0, 2, 4, 7, 14, 21 and 29 of the  monitored period. In addition, five animals from the experimental group were analyzed through MicroCT in the same study time periods. After 29 days, three animals were subject to a stent fracture.

As a result, since the stents colonized with fibrotic tissue as a natural response to their subcutaneous implantation, the new probe detected significant differences in content from the basal implementation to 30th day of monitoring (restenosis). Finally, researchers could differentiate through microwave spectrometry those stents that were fractured from the ones that were still complete.

In short, according to Antoni Bayés Genís, researcher from the Germans Trias i Pujol Research Institute and CIBERCV, "we need more studies to verify these results and we think it is necessary to move these experiments to a pre-clinical animal models that are similar to humans, and if corroborated, this technology should be validated in a small cohort of patients".

"We are working on the technological aspects that will allow us to conduct pre-clinical experiments and their implications in a future clinical application", says Joan O'Callagan, researcher in CommSensLab (UPC), "this involves, among other things, the development of devices with the ability to detect stents at increased depths and detection techniques that tolerate the movement of stents in coronary arteries".