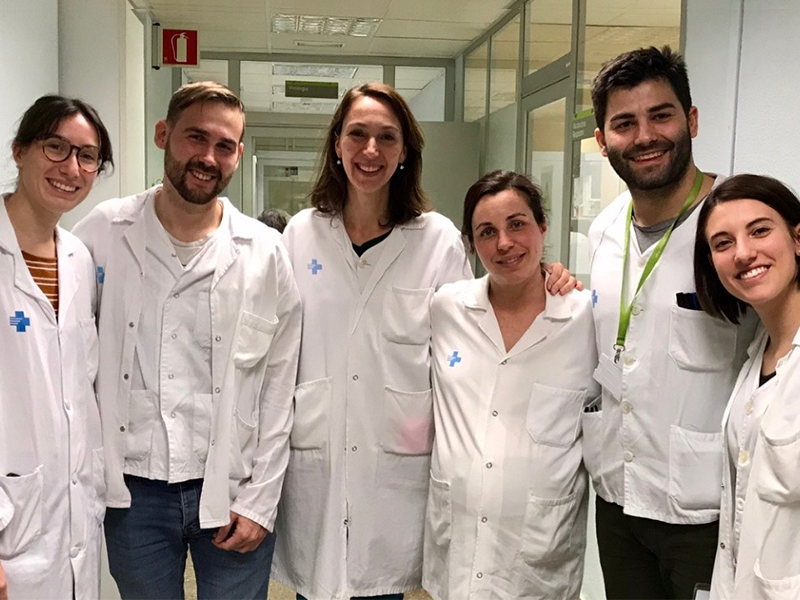 In the latest installment of their work to reduce hepatitis C virus in Catalonia, and as part of the worldwide campaign, Members of the Clinical Virology and New Diagnostic Tools Group at the IGTP, led by Elisa Martró have found that two diagnostic tests that can be carried out at the point of care are simple and effective methods for testing people who inject drugs (PWID), a population particlarly vulnerable to hepatitis C. The paper is published in the International Journal of Drug Policy.

As the World Health Organization campaign to rid the world of Hepatitis C virus (HCV) continues, the core of the epidemic is centred in people who inject drugs (PWID). This vulnerable population is challenging to treat due to their lifestyle and low access to medical care. Any public health policy must take these factors into account, while also making testing as effective, efficient and cheap as possible. Part of the work of the Clinical Virology and New Diagnostic Tools Group at the IGTP , led by Elisa Martró is to obtain empirical data on the tests available in real life situations, so that policy makers can make informed decisions.

The team have previously developed a blood test, where a drop of blood from a finger prick is transferred to a special card, which is then analyzed in a central laboratory to detect the HCV RNA. This performed as well as the standard testing strategy, which requires two different tests, a venous blood draw and several visits to mainstream healthcare services. This work was carried out to improve access to diagnosis to PWID attending harm reduction services in Catalonia.

"Our latest work compared our method, in which a dried blood spot is collected on-site at the harm reduction center and then sent to central laboratory for HCV RNA testing, and a method in which capillary fresh blood is directly tested at this centre, known as Xpert FS, which has recently  received the European CE mark and provides results in about one hour. We found that both are reliable test methods for diagnosing HCV on-site," explains Veronica Saludes, the first author of the study. "Importantly, this is the first time that the Xpert FS test has been performed by non-laboratory staff and also the first time it has been used in Spain."

These results were obtained and verified in a real-world setting, in one of the largest harm reduction centres in Catalonia, which offers supervised drug consumption among other services. This centre was used by 2,093 users in 2017 (Catalan Public Health Agency 2018) many of whom are temporary visting users. The staff performing these harm-reduction tasks were trained to carry out the HCV tests and had direct support from the central laboratory through remote computer access. The PWID taking the tests were also asked to complete a questionnaire and 50% indicated that they preferred to get their results on the same day. With the Xpert FS test, delivery of test results to participants on the same day of testing was possible in 80% of cases.

"Both the reliability of the tests and their practicality are important," Martró tells us. "Both methods are reliable and both are useful simplified tools for the identification of individuals with viremic HCV infection and thus in need of treatment, amongst the population of PWID. Either the Xpert FS PoCT or the HCV-RNA assay from on-site collected dried blood spot (DBS) samples could greatly improve the diagnosis strategy currently being used in the harm reduction services network in Catalonia, in which all people with a positive rapid antibody test (about 80% of cases) need to be referred to the mainstream healthcare services to get a confirmed diagnosis."

The Xpert FS is a quicker method for detecting HCV, allowing for same day results, and would allow decentralization of testing with supervision from the laboratory. However, it is not possible in some centres, due to cost, space, power supply or internet connectivity and in these situations the HCV RNA assay in DBS is equally valid. Both of these tests would be useful to increase awareness of HCV infection amongst PWID and to help them access antiviral treatment, which is crucial to achieve the WHO hepatitis elimination goal.

This study was a multidisciplinary collaboration between the Microbiology Service at Hospital Germans Trias i Pujol, the Center for Epidemiological Studies on Sexually Transmitted Infections and HIV/AIDS of Catalonia (CEEISCAT), the Public Health Agency of Catalonia, the harm reduction center REDAN La Mina and Jeffrey Lazarus of the Barcelona Institute for Global Health (ISGlobal), with a view towards implementing these diagnostic solutions in low-income countries.