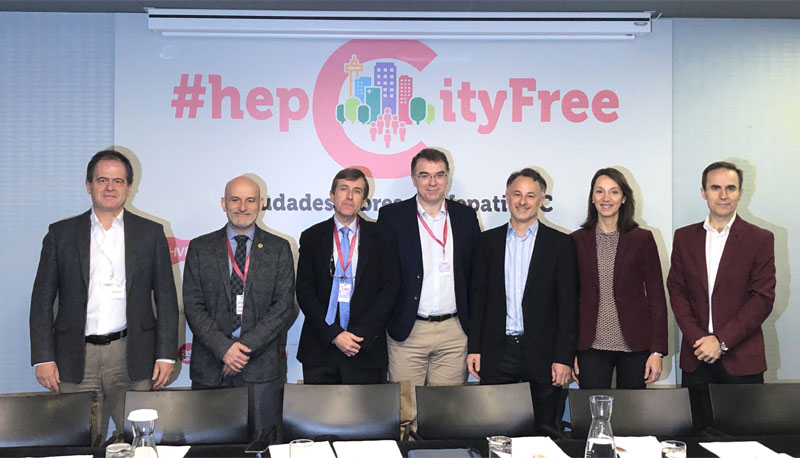 The #hepCityFree movement was presented this week in Madrid, with the seven professionals forming the Expert Committee, one of whom is Dr Elisa Martró, leader of the Clinical Virology and New Diagnostic Tools Group at the IGTP and the Microbiology Service at the Germans Trias Hospital. Since 2015 Dr Martro's research group has been working to make the diagnosis of hepatitis C virus (HCV) simpler by developing and validating a technique to detect the RNA of the virus in a few drops of dried blood in point of care tests. The aim is to make access to hepatitis C testing easier for vulnerable groups, while also defining the scale of the HCV epidemic in Catalonia. Due to her experience in the fields, Dr Martró is also a member of the Committee drafting the Prevention and Control Plan for Hepatitis C in Catalonia.

Hepatitis C is treatable and curable. In the last four years 130,000 patients have been treated in Spain with new medications and have successfully recovered from the disease. However, in order to eradicate it completely, these treatments need to reach all the cases of viremic HCV (about 35,000 in Spain), those that might be infected with HCV, but don't know it (about 22,500 in all Spain) as well as those who have been diagnosed, but for one reason or another are not in treatment. #hepCityFree, has been launched by the Alliance for the Elimination of viral Hepatitis in Spain (AEHVE) to focus on big cities at a national level and establish alliances in this last stage of the battle against the disease.

In this context and in line with the WHO objectives to reach elimination by 2023, the movement is proposing new strategies. Cities are vital and due to their population density and concentration of risk factors in some neighbourhoods and metropolitan areas it is key to act on elimination and micro-elimination of the disease there. Dr Martró is only too well aware of this, as her line of research is into how to reach these more vulnerable sectors of society and make diagnosis and elimination of HCV easier for them.

"It would be of enormous value if cities could open their centres for social services, welcome centres for immigrants and hostals for the homeless etc. to the autonomous Governments' health authorities, so they could be used for the rapid detection and treatment of the hepatitis C virus in the most vulnerable groups," explains Martró. The fact that Martro's group has tools to facilitate diagnosis available is an additional positive factor for this strategy.

The municipal alliance with the biggest cities particularly, is also vital in promoting prevention and a culture of prevention.  Actions to bring information to the most vulnerable groups are important, but it is also necessary to deal with the control of hygiene and health in businesses offering tattoos, and micro-pigmentations etc. Cities can also help by collecting data on indicators and comparing experiences,

"-working as a network of cities all implicated in a common project with a common objective," sums up Dr García-Samaniego, Coordinator of the AEHVE.

In February 2017, scientific societies and patients groups created the Alliance for the Elimination of Viral Hepatitis in Spain (AEHVE) with the aim of committing to the World Health Organization (WHO) objective to eliminate viral hepatitis by 2030 and to work towards that objective in Spain. In fact Spain already had the Strategic Plan for Tackling Hepatitis C (PEAHC).