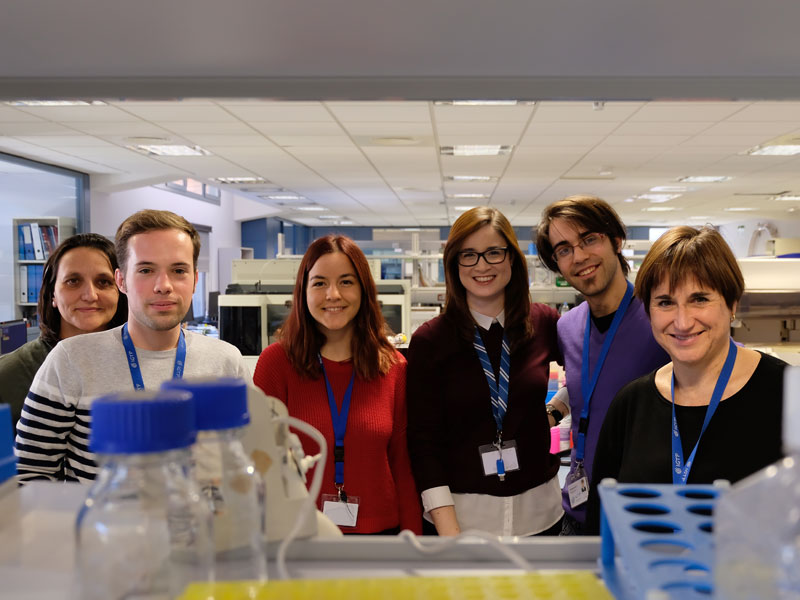 To celebrate World Diabetes Day we will literally be talking about the illness at the IGTP. Several members of the Immunology of Diabetes Group, which is led by Marta Vives-Pi and concentrates on research into diabetes type 1, will be taking part in talks and discussions in scientific and public forums during the next few days.

14 November is World Diabetes Day and Dr Marta Vives-Pi has been invited to give a talk to biomedicine students at the University of Barcelona. From 11.00 she will be sharing her experience in translational research focusses on immune diseases and the role of immunotherapy and Nanomedicine can have in treating this family of diseases in general and diabetes type 1 in particular.

In the afternoon, Adrián Villalba, a pre-doctoral student in the group, will be delivering the oral presentation Novel compound identified by drug repositioning ameliorates experimental autoimmune diabetes to the Academy of Medical Science and Health of Catalonia and the Balearics. This will be at 19.00 during the XIII Conference of the Catalan Immunology Society. The following day, Villalba will be in Granada to give a public interest talk to the Association of Diabetes Patients of Granada (AGRADI) to talk about re-educating the immune system to fight diabetes type 1.

The following weekend, the group will also be present at the II Scientific and Educational Workshop organized by the Fundació DiabetesCero for World Diabetes Day. The workshop will be on Saturday 23 November during the morning with informative sessions for patients and family members. Dr Silvia Rodríguez will present the IGTP research group there with a summary of recent advances in research. DiabetesCero is a charity which works to promote, accelerate and inform about research into diabetes type 1 and raises funds for more studies. Dr Vives-Pi's group is carrying out one of the projects financed by the organization.

Type 1 diabetes mellitus (T1D) is caused by the destruction of the pancreatic cells that produce insulin (β-cells), which are part of the mechanism that controls the storage and use of sugar in the blood. It is normally diagnosed in childhood or adolescents.  Incidence is increasing by 4% each year, it is known that both genetic and environmental factors play a part but exactly what causes the disease to appear in individual cases is difficult to define.  The IGTP carries out research into the disease in the group led by Dr Vives-Pi and the Endocrine Regulatory Genomics Group, with Dr Lorenzo Pasquali at its head, which has just published a study in Nature Genetics, where they have located genetic variants associated with a higher risk of developing the disease. Other groups at the institute and associated with the hospital also work on Diabetes type 2, more related with endocrinology and obesity. They are the groups led by Dr Manel Puig-Domingo, Dr Nuria Alonso and Dr David Sánchez-Infantes.