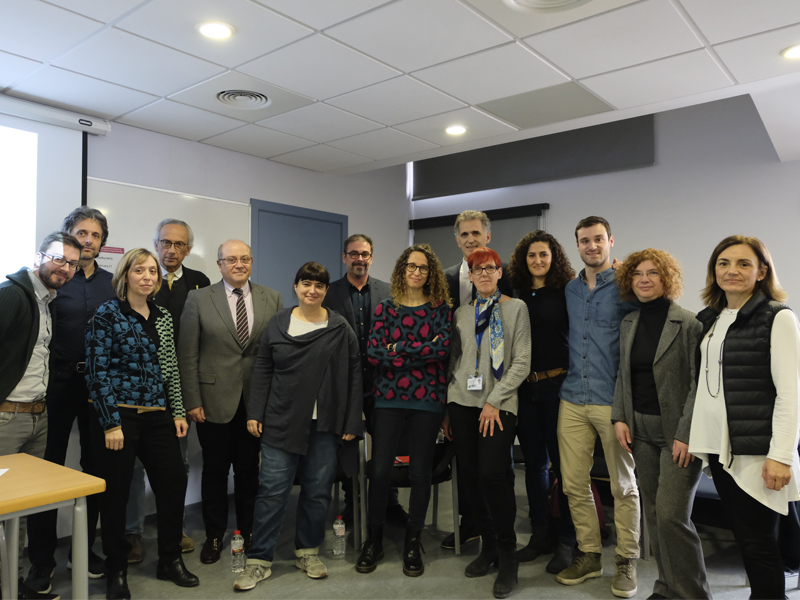 Institutions on the campus held a celebratory workshop that included hearing scientific presentations; outlining of work to be done and the signing of a declaration of intentions by the directors.  The event closed with a participatory round table session.

On 11 February the Research institutions on the Can Ruti Campus celebrated the International Day of Women and Girls in Science.  "At this point in the 21st century, when according to United Nations figures there is still a recognized gender gap at all levels of science, technology, engineering and mathematics (the so-called STEM disciplines) the institutions on the campus have decided to start the conversation and take action," Dr Manel Puig, Director of the IGTP, explained.

During the event Dr Puig; Dr Bonaventura Clotet, Director of IrsiCaixa, Aids Research Institute and President of the Fight Aids Foundation; Dr Manel Esteller, Director-Elect of the Josep Carreras Leukaemia Research Institute (IJC); Dr Jordi Casabona, Director of the Centre for Epidemiological Studies of Sexually Transmitted Disease and AIDS in Catalonia (CEEISCAT), Dr Antonio Dávalos, Director of the Germans Trias Hospital Hospital and Dr Jordi Ara, Managing Director of the Northern Metropolitan Territory of Barcelona, Catalan Health  Institute (ICS) all signed a declaration of intentions, either in person or by video link.  The letter, with six key points is based on the recommendations from the United Nations.

The event also served to present the Working Group: Women in Science, made up of volunteers from different institutions.  Nuria Izquierdo Useros, one of the founding members explained the objectives, "gender equality is a hot topic and research institutes are required to include actions to bring it about by the European Research Council, but we wanted to open discussion at all levels in our institutions and organize events and practical sessions.  This kick-off event is to get people talking and discuss this very serious manner in an interesting way," she told us.

Researchers from the Gender & ICT (Information, Communication and Technology) Research Group, Open University of Catalonia also participated.  They are coordinators of the European Project: Communities of Practice for Accelerating Gender Equality and Institutional Change in Research and Innovation across Europe.  The IGTP has signed up as participating centre and will be receiving information, training and assistance with writing the Equality Plan.  "This will be a tremendous boost to our efforts," says Julia Garcia Prado, researcher at the IrsiCaixa and Scientific Director at the IGTP, "our research centres here have almost identical goals in gender equality and we are all seeking the Human Resource Excellence for Researchers accreditation from the ERC.  Expert help from this international group will invaluable."

The event closed with a round table with experts from the sessions moderated by Nuria Izquierdo, questions moved quickly and the audience joined in the discussions.

Marta Monguió, a young researcher from the IGTP and member of the Working Group summed up the event; "We have learned a lot, but most of all that research shows us that gender equality has very serious implications and that we need to change our attitudes as well as institutional rules. In some cases the very grant funding bodies have discriminatory regulations."

"Every one of us can contribute," added Jose A Muñoz-Moreno, of FLISA, "sometimes it is just a matter of taking the first step."

INTERNATIONAL DAY OF WOMEN AND GIRLS IN SCIENCE

The International Day of Women and Girls in Science is an initiative of the United Nations and is one of the activities designed to reach internationally agreed development goals, including the 2030 Agenda for Sustainable Development.

CAN RUTI DECLARATION OF INTENTIONS

Can Ruti Campus Working Group for Women in Science:

The role of women in society worldwide is necessary and key. In science in particular, currently there are clear deficiencies in the protection of the rights of women to develop their research careers. From this Working Group we are committed to work against this unfair reality in the Can Ruti Campus.

We manifest the following commitments. Please, sign this declaration if you agree with them.

I am truly committed to:

1) Encouraging girls and young women to explore scientific paths in their individual careers.

2) Promoting mentoring and networking for women scientists to enable them to plan and develop professional trajectories that meet their expectations.

3) Working against the barriers and difficulties that may hinder the entry and long-term projection of women into professional science or the tasks of women scientists in their research careers.

4) Defending the access of women to senior positions and leaderships in sciences as normal and regular processes in the development of their professional careers.

5) Ensuring gender equality through participation and leadership in grant submissions, symposiums, publications, scientific commissions, decision boards, and in any other activity involving research and scientific activity.

6) Sharing and celebrating with the general public the contribution that women scientists make to scientific progress and to societies.