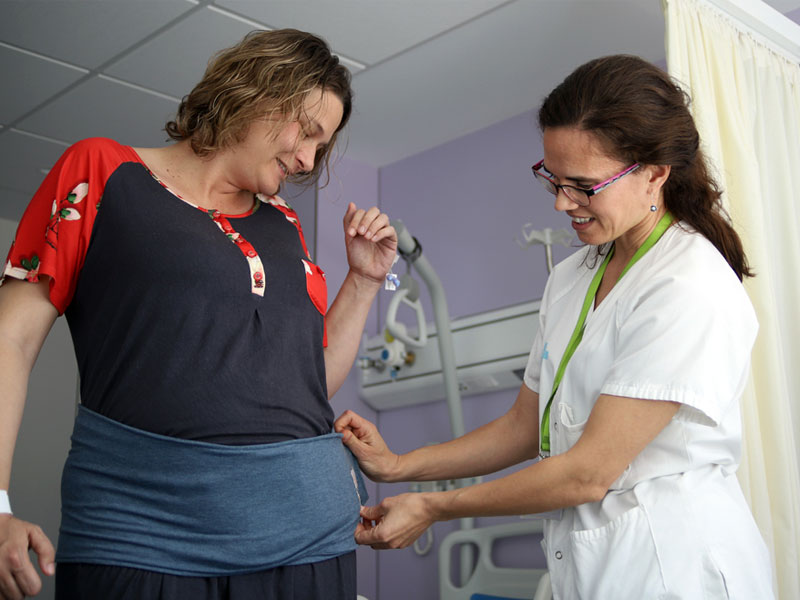 The belt, designed by a midwife at the Germans Trias Hospital, applies heat to the lumbar and suprapubic region, where the pain of contractions is strongest and allows the wearer to move about freely.  The project included a clinical trial with 134 women participating, run by Laura Tarrats, who has been able to carry out the work thanks to the support of a Germans Trias Sapiens Award.

The Germans Trias midwife Laura Tarrats has designed a thermal belt that reduces the pain of childbirth and calms sciatica and other discomforts that appear during the third term of pregnancy. The belt combines the application of heat in two places on the body: the suprapubic and the lumbar regions, where women feel contractions the most.  Heat, which is a powerful vasodilator, stimulates the sensitive nerve endings and temporarily reduces the perception of pain during the start of the birth.

Tarrats received a Germans Trias Sapiens research reinforcement grant in 2017.  With the support of the grant the midwife has been able to carry out a clinical trial in which 134 women have participated, 50 in a control group and the rest using the thermal belt.  The group using the belt during the trial saw their level of pain diminish significantly while they wore it, compared with the group who did not use heat during the same period of time.

The Germans Trias i Pujol Research Institute (IGTP) advised on the process of protecting the technology by establishing a utility model.  The results obtained from the trial have meant that the licensing process has culminaed with an agreement with the company Kusi Wawa to market the device under the name of Wawa mom.

The need to design and create this device came out of our daily routine.  Midwives offer different measures of comfort for when you still cannot use the epidural, or for mothers who want a natural birth.  One of these measures is the local application of heat," explains Tarrats. "The challenge was to maintain the heat on these spots permanently so that the mother can move about during the birth," she adds.

Laura Tarrats has presented the thermal belt at the 4th European Conference Intrapartum Care, which took place in Turin 14-16 March.