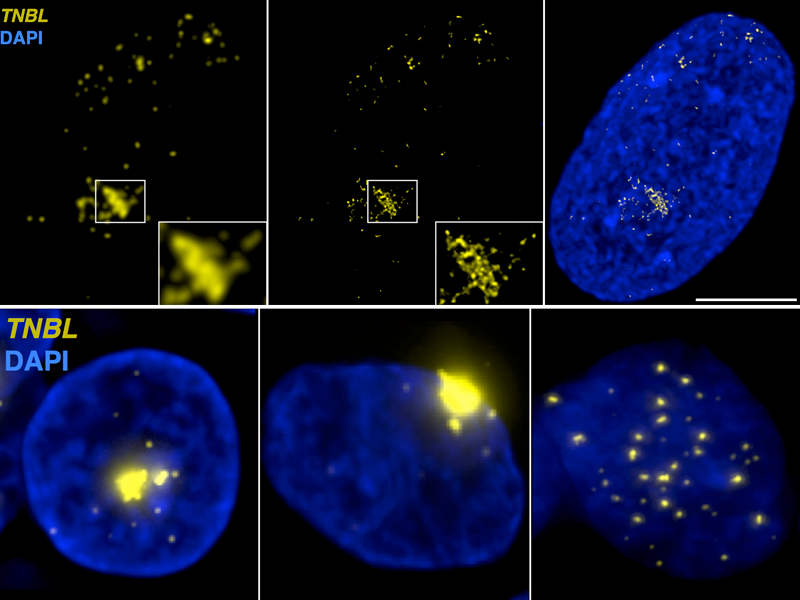 The Genetics and Epigenetics of Cancer Group, led by Manuel Perucho have just published a paper in the prestigious journal Nucleic Acids Research in which they describe a new RNA suspected of playing a role in some colon cancers.  Gabrijela Dumbović carried out a large part of the experimental work described in the paper.

When the human genome was first sequenced in 2000 the initial euphoria soon subsided when researchers discovered that although we could see the code we couldn't interpret it and still less make health predictions from the results.  We now know that apart from the code, the 3D structure of the DNA making it up and the proteins attached to it determine whether genes are switched on or off, further complicating the story.  After nearly 20 years we are just beginning to see treatments that are the direct result of the Human Genome Project, why has it taken so long?

This technical paper, describing a new long non-coding RNA identified in samples from some colorectal cancer patients, details a long list of different experiments.  We asked Sònia Forcales, who led the research, to explain their results to us.

"One issue is that 98% of the human genome was originally classified as Junk DNA, with no purpose", explains Forcales.  It has not been studied as much as the parts containing known genes and a lot of it is difficult to study; for example in the case of our long non-coding RNA the DNA coding for it (NBL2) is repeated many times on different chromosomes making it difficult to pin down to any particular position or function.  However, we know this RNA is found in samples from a particular group of colorectal cancer patients, importantly, the younger ones.  In order to find a way to use this to improve diagnosis and treatment we needed to describe this RNA and map exactly where it is, which is basically detective work at the molecular level," she adds.

The NBL2 regions of DNA are normally methylated; molecular groups are attached to them maintaining this region silenced in healthy cells.  In some colorectal cancer cells these methyl groups are lost and the DNA instructs the cell to start making the RNA, which the group have called TNBL (Tumor-associated NBL2 transcript). They have defined exactly where on the genome this is taking place and the structural mechanism by which it happens.  "You could say that we now have the name and address of this RNA molecule" says Forcales.  "Now we can go after it to find out what it is doing and how to stop it, if necessary."

Dr Perucho, leader of the group told us that, "This is an elegant piece of work describing TNBL, a long non-coding RNA that we suspect is playing a role in cancer.  It is painstaking work picking apart everything that is going on in what we once thought was junk DNA.  This is what basic cancer research is about, identifying targets that we can then go on to use for diagnosis and therapies."  It can take 20 years to get from the first discoveries to a fully licensed cancer therapy, which may seem like a long time.  "You have to see this in context," explains Perucho, "We have been investing in research for over 40 years and now we are seeing new therapies coming into use every day.  As potential patients we are living in an age where more and more cancers are found early and cured and this will go on increasing.  I would say this is grounds for optimism"