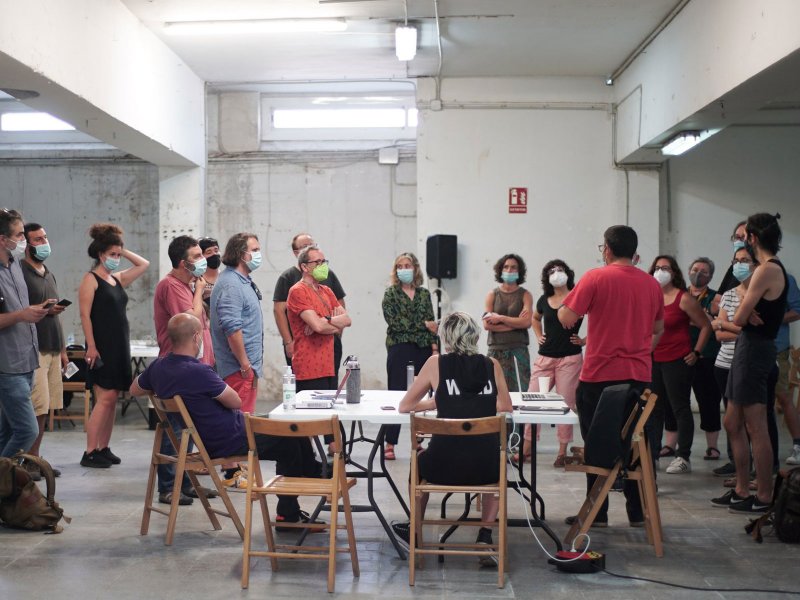 A total of 23 researchers have taken part in the first event of the European project European Performing Science Night (EPSN) part of European Researcher's Night a European public event that brings scientists and society together. All three research groups on the camps taking part in the project participated in the workshop.

Research staff from three groups from the Can Ruti Campus, two from the IGTP and one from IrsiCaixa took part. They are the Innovation in Respiratory Infections and Tuberculosis Diagnosis Group, led by Dr José Dominguez; the Viral Immune Invasion and Vaccines (VIRIEVAC) Group, led by Dr Julia García-Prado and the Epigenetic Mechanisms of Cancer and Cell Differentiation Group led by Dr Miguel Angel Peinado. The complete EPSN team also includes researchers from the Institute of Neuroscience at the University of Barcelona, the Universitat Autònoma de Barcelona, the Universitat Oberta de Catalunya and the Laboratoire Parole et Langage (CNRS, ILCB i Aix-Marseille University).

During three intense days the researchers have been far from their laboratories and have immersed themselves in the creative methodology of Epica. Through training, group cohesion exercises and cooperative tasks they have built challenges that hybridize fields as different as cognitive neuroscience, health, linguistics, climate emergency, pubic participation or philosophy.

Scientific challenges that serve as inspiration and a starting point for the 30 creative talents, including artists, scientists and technologists, who will take part in the second event within EPSN 2021. It will be a co-creation workshop that will culminate in a performance as an actual experiment in which the audience will be the protagonist, allowing the researchers to obtain data and parameters that will be useful for their studies.

The Epica Foundation of the Fura dels Baus offers 30 places to take place in the co-creation workshop, a free face to face workshop, which will unfold between 13-25 September. The deadline for registration is 15 July. You can find more information and the form to sign up using this link.

EPSN 2021 offers a unique opportunity for researchers to show the diversity of science and its impact on the lives of citizens, and stimulate interest in professional careers in research, especially amongst younger people. These activities highlight how researchers contribute to society, show their work in an attractive interactive forum and will be summed up and displayed in a third event that will be free and open to the public on 25 September in Badalona.

These events are all within the framework of the project which has received funding from the Marie Skłodowska-Curie del programa H2020 of the European Union under the finance agreement 101036143-EPSN 2021.