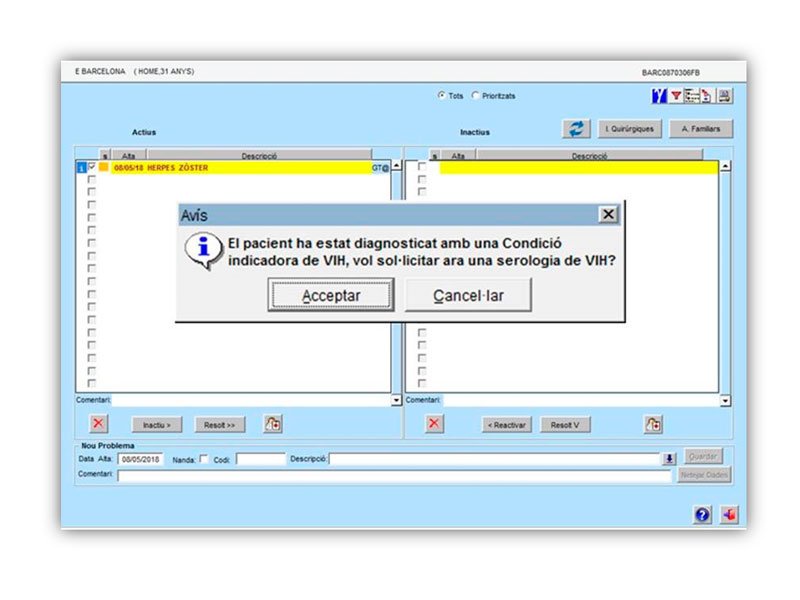 Researchers from the IDIAP Jordi Gol Foundation, CEEISCAT and the IGTP have shown that a strategy to improve early detection of HIV by primary healthcare providers is effective. When a patient is diagnosed with an illness or group of symptoms which could be related to HIV, an alert appears on the screen of the doctor attending in the form of a pop-up, which recommends a blood test. The results of the project, which have been presented at the international conference HepHIV, show that primary healthcare centres with the system in place are detecting 50% more positive cases than those which don't.

Implementing an electronic alert system in primary healthcare consulting rooms would increase the number of HIV tests being taken and the early diagnoses made. This has been shown by the clinical trial carried out by the Foundation University Institute for Primary Health Care Research Jordi Gol i Gurina (IDIAPJGol), the CEEISCAT Centre for Epidemiological Studies of Sexually Transmitted Disease and AIDS in Catalonia and the Germans Trias i Pujol Research Institute (IGTP), with the collaboration of the Catalan Society for Family Medicine (CAMFiC) and the Association for Family and Community Nursing (AIFiCC) in results presented to the HepHIV International Conference. The research project was funded by the Ministry of Health of Catalonia through the PERIS 20216 grants call and ViiV Healthcare.

The clinical trial started in 2018 and aimed to improve early diagnosis of HIV in primary health care by increasing the number of tests. The study has used an electronic alert on the digital health records (Primary Care Clinical Station [ECAP to use its initials in Catalan] of 51 primary healthcare teams in the city of Barcelona so that a pop-up window appeared on the health records of patients diagnosed with conditions that can be indicators of HIV infection.

HIV indicators refer to a group of conditions and illnesses that can be associated with HIV or AIDS, or illnesses that mean that HIV infection must be ruled out, that are coded on the health record. The pop-up which appears on the records of patients with these indicators suggests that the doctor send the patient for an HIV test.

To evaluate the impact of this alert, the group compared the data from a group for whom the alert had been activated and those of a control group without the alert. "Thanks to the study, we have shown that the electronic alert serves to carry out more tests, but above all, in more targeted way. The percentage of patients tested is 3% higher than in the control group, but in contrast the number of positive results rose by 50% in the alert group," explains Jesús Almeda, researcher from the IDIAP Jordi Gol Foundation.

“Early detection of HIV is fundamental to improve prevention, to improve the prognosis for patients and to reduce the number of cases. Currently 36% of new HIV diagnoses in Catalonia are 'late diagnoses', which means that the patients have been living with the infection for years without knowing it or receiving treatment. The largest affected group is men over 50. Primary health care has an important part to play, in that it is the doorway for the population to the healthcare system, this alert will certainly mean an increase of early diagnoses of the infection," explains Cristina Agustí, researcher at CEEISCAT and the IGTP. "The study has allowed us to show that the alert is particularly effective for middle-class men over 50, who have indicator conditions which are not a sexually transmitted disease (STD) or a defining illness for AIDS, but conditions that do not always prompt the doctor to ask for an HIV test, but are very common, such as seborrhoeic dermatitis shingles and the syndrome similar to glandular fever," concludes Agustí.

Extending the alert system to all of Catalonia

With the data from this study, which was only carried out in Barcelona, we must plan to extend the implantation of this indicator alert to the rest of the primary health care teams in the Catalan Institute of Health (ICS) to improve early HIV diagnosis. Late diagnosis means not only a worse prognostic for the evolution of the infection for individuals, higher rates of morbimortality and an increase in the possibility of transmission to others, but it also means an increase in the economic costs of treating patients. "The intervention should be easy to apply in all the primary care centres of the ICS in Catalonia and at low cost, in fact virtually no cost, and it is a measure that will have an impact at all levels," insists Almeda.