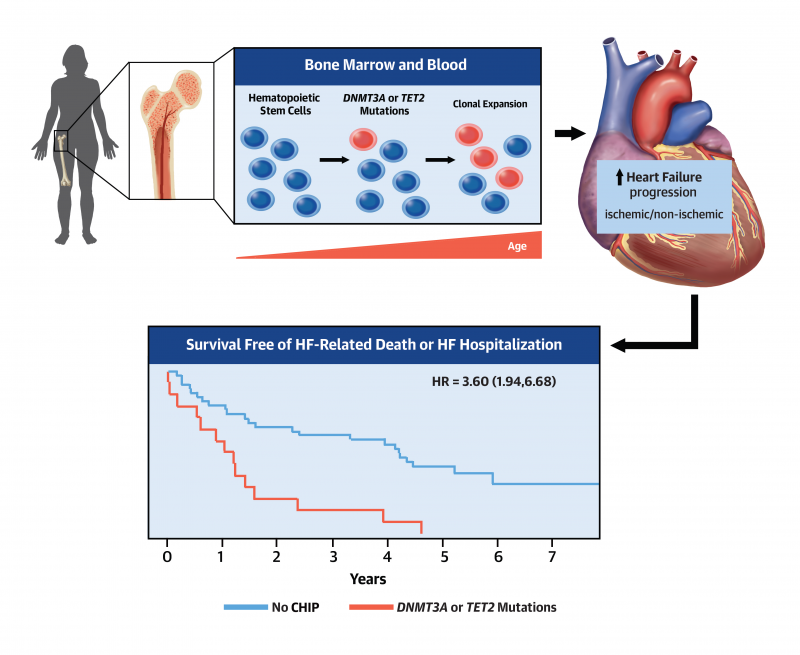 A team of scientists led by the Centro Nacional de Investigaciones Cardiovasculares (CNIC) and the Hospital Universitario Virgen de Arrixaca in Murcia has discovered that the presence of acquired mutations in blood cells (somatic mutations) indicates an increased the risk of rapid progression of heart failure, one of the main causes of death worldwide. Researchers from the Heart Disease Group at the Germans Trias i Pujol Research Institute (IGTP), led by Antoni Bayés-Genís also participated in the study.

"Clonal hematopoiesis is linked to aging, so that over time the chance increases that this process will occur,” explains Dr. José Javier Fuster, coordinator of the study published in The Journal of the American College of Cardiology (JACC). "Recent studies have shown that people with clonal haematopoiesis have a higher risk of developing haematological cancers and dying. However, this often not due to the cancer, but to cardiovascular causes."

This new discovery has generated a lot of interest in the possibility that clonal haematopoiesis might contribute to the increase in cardiovascular risk associated with aging. In the study researchers have analyzed how the presence of clonal haematopoiesis effects the evolution of patients with heart failure, including ischemic heart failure and other types. Heart failure is the main cause of hospitalization among people over 65 and is a major cause of illness and death.

The scientists monitored the genomic DNA sequence of blood cells from heart failure patients, who were monitored for many years in order to detect the presence of clonal haematopoiesis and assess its possible connection with the progression of their disease.

The authors conclude that their study supports the emerging idea that clonal haematopoiesis represents a new cardiovascular risk factor and an important link between aging and cardiovascular disease. Additionally, the results open the way to the development of personalized therapies for patients with these somatic mutations, with the aim of preventing heart failure progression.

The study was funded by a Beca Leonardo para Investigadores y Creadores Culturales (2019) from the Fundación BBVA, the Carlos III Institute of Health, the Spanish Ministry of Science and Innovation, and the Fundación Séneca de Ciencia y Tecnología de la Región de Murcia.