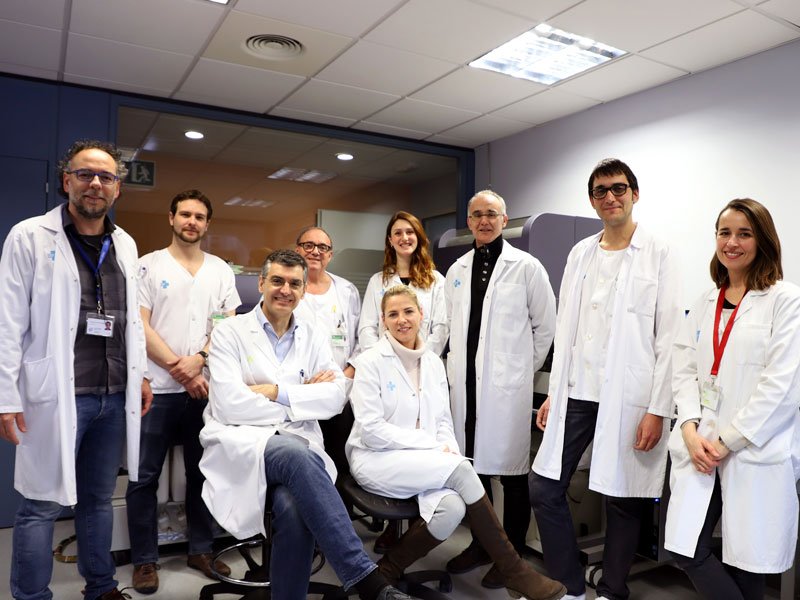 Researchers of the Cardiovascular Disease Group and the CIBERCV Group, led by Dr Antoni Bayés Genís, have advanced the study of prognostic markers for heart failure, a progressive disease and a public health problem of the first order. They have studied monocyte (a type of white blood cell) count and distribution in a cohort of 400 outpatients with heart failure with a view to showing their predictive value. The study has been published in PLoS One.

Monocytes are a heterogeneous population of effector blood cells with key functions in processes of repair and maintenance of the integrity of our tissues.   It has been demonstrated that there are three subclasses of monocytes known as; classical (CD14++ / CD16-), intermediate CD14++/CD16+) and non-classical (CD14+/CD16++). Previous studies have already shown the existence of an association between some of these sub-populations of monocytes and cardiovascular events in various diseases.

This study aimed to explore the distribution of the three groups of monocytes to see if these were related to the events being studied in order to demonstrate if one of the sub-populations of monocytes played a predictive role.  To carry out the work researchers studied a group of 400 outpatients with heart failure.

As a result the group found a significant difference in the percentage of sub-populations of monocytes compared to previous studies carried out in healthy people. In particular, the predominant sub-population is the classical (50.0 ± 17.2%), followed by the intermediate (42 ± 17.2%) and the non-classical population was present at much lower frequencies (8.1 ± 4.0%).  These levels suggest a significant increase in intermediate monocytes in patients with heart failure compared with healthy individuals. The absolute count of cells for each of these sub-populations of monocytes (number of cells per microliter) shows a superior prognostic value in the patients studied compared with the analysis of sub-populations of monocytes based on percentages.  "In conclusion we need more studies to confirm our findings and to be able to better interpret their clinical value, although we believe we are closer to new and better prognostic markers for the disease," explains Bayés.

Finally it is important to stress that multivariate analysis has shown that the sub-population of intermediate monocytes is independently associated with the cause of death and the combination of death by any cause and hospitalization for heart failure.  Santiago Roura, co-author of the study, points out that "In this sense, the persistence of this type of pro-inflammatory monocytes, beyond the initial phases of reparation, could extend the adverse effects related to long term inflammation into more distant but still healthy areas of the heart in these patients.  This could be a possible explanation for the poorer prognostic that higher levels of intermediate monocytes supposes."

Heart failure is a progressive disease and a problem for public health of the first order as it represents a considerable healthcare, social and economic burden.  In developed countries it affects between 1 and 2% of the adult population, rising in the over-70s to 8 to 10% and it is the main cause of hospitalization in this group.  It is thought that a better stratification of risk, through a better understanding of the mechanisms underlying the disease and new prognostic markers could be a way to determine which patients could benefit from a closer follow-up and more aggressive treatments.