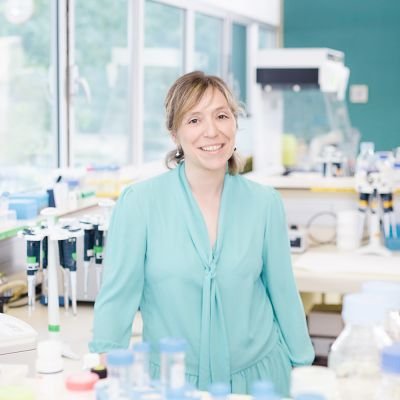 The IGTP has incorporated a new Scientific Directior, IrsiCaixa researcher Julia García Prado. The new position has been presented in the Research Agenda 2018, the annual reviews the research on the Campus. The General Director of IGTP, Dr. Manel Puig Domingo, has valued the positive results and the growing evolution of the research associated with the institute, as well as presenting the new challenges that must be faced, now, with a new Scientific Director.

Dr. García Prado will combine the new position with the leadership of her group at IrsiCaixa, VIRIEVAC, focused on the design of new therapeutic strategies against HIV. During the presentation, Dr. Puig has especially valued the direct relationship and experience in research of García Prado, as well as the value of including in the strategic scientific decisions of the Campus a representative of one of the institutions from it.

Until now, the Scientific Directorate was occupied on an interim basis by Dr. Puig himself, who wanted to acknowledge the work of Dr. Miquel Ángel Peinado, IGTP researcher, who has been advising on strategic and scientific management matters all these interim years.

Among the new challenges of the Scientific Directorate is to participate in the drafting of the new Strategic Plan of the institution, which should be developed during the first quarter of 2018. Also focus on the follow-up of the current research groups, helping their configuration and identifying and promoting those emerging groups.

In addition, it is planned to develop a training plan for basic and clinical research staff, and to continue betting on the retention and incorporation of talent, as well as ensuring diversity and transparency in the Campus. All this with the aim of maintaining the figures and the level of excellence of the research carried out in the Can Ruti Campus.

Dr. Prado (Aviles, 1977) has a degree in Biochemistry and a PhD in Immunology with honours from the Universitat Autònoma de Barcelona (2005). After finishing her PhD, she moved to the University of Oxford to continue her postdoctoral research with a Marie Skłodowska-Curie (ERC) scholarship.

Since 2010 she is a Miquel Servet researcher and, since 2013 she leads the VIRIEVAC research group at IrsiCiaixa. So far, her work has focused on HIV-1 as a model of persistent viral infection. From a basic to translational perspective, her research has as its final objective the design of new immunotherapeutic strategies against the virus.

Dr. Prado also performs teaching and training tasks for research personnel, as well as dissemination of research in society. So far she has contributed with a total of 40 publications in journals of international impact - more than 90% of them in Q1 -, which have obtained more than 3,000 citations. She is a reviewer for international scientific journals such as PLOS Pathogens, Journal of Virology and Retrovirology, and participates as an evaluator of projects of different national and international agencies.